On Sunday, January 27th, 2019, an info event was held att Kafé 44:an in Stockholm about 10 detained and 1 imprisoned comrade in S:t Petersburg and the city of Penza south-east of Moscow.

Afterward a solidarity manifestation was held outside the russian embassy in Stockholm. The manifestation was directed mainly toward the ten now detained, but in protest against the total of torture and violence carried out on all 11 originally belonging to the case. About 15 people participated in each event. The gathered were meet by a number of police and were after a shorter turmoil forcibly removed from the entrance of the embassy to a park in the close vicinity.

The support events that took place were in solidarity of 10 previously and currently politicaly active anarchists and antifascists who have been detained sinced October 2017 and January 2018 accused of belonging to a terrorist network. The network according to russian secret security service, FSB, was planing to attack the elections of March 2018 in Russia, and the following FIFA worldcup in the summer of 2018. No such reliable evidence lies at hand today. All detained have been under heavy and systematic torture and violence by FSB and all current evidence in the case has been fabricated under these circumstances.

One of the previously 11 detained has worked along to the full with the FSB after longtime torture and he has now been sentenced to 3,5 years in prison. He is not currently supported by the anarchist black cross
movement in Russia.

We clearly stated during our manifestation that we support movements and
activists fighting for economical, political and juridical equality.
These movements and activists are under heavy pressure in Russia since
2012 and periodically also in Sweden. We stated that if there would have
been planed political actions against the elections and FIFA-games, it
would have been a positive thing, depending on the means of how these
activities were carried out.

To further support the detained in S:t Petersburg and Penza, you can
contribute with money to the support fund (bötesfonden). The support
fund is run by Fånggruppen Syd, in southern Sweden. Money is transferred
to ABC-Moscow (anarchist black cross) to support the detained with legal
assistance, medicines and food.

Mark your contribution with: “russia prisoners”.

Spread the information! Get involved!

Speach held outside the Russian embassy:

“Companions, friends and listeners! We have gathered this dark and
dreary evening outside the russian embassy, to show our support for ten
detained politically active people in russian S:t Petersburg and Penza.
They have been locked up since October 2017 for a suspected complott
against the elections and soccer world championship of 2018. If
political action was planned to put into light the corruption and
inhumane economic exploitation carried out by political and capital
forces organizing these events, it would be a good thing such actions
were done.

Unfortunately so is not the case. All proof of the political actions
these ten people have been locked up for has been forcibly created under
heavy physical torture. The so called terrorist network has never
existed. It is a fabricated case. All evidence found on the sights has
been planted.

It is said these ten people belonged to a terrorist cell with the aims
to complete actions against the elections and FIFA-games.
The truth is that one of the main political activities of the detained
was social work delivering and gathering clothes and food for homeless.

It is said that these ten young fellows were a threat to the russian
state.
We say that basic social work is not a threat but a contribution to the
russian society.

The claim is to sentence our ten friends and neighbors to many years in
prison on charges of terrorism. The answer to this is that all factuall
evidence of proof which may have existed, may no longer be counted as
reliable, after 16 months of electrical torture and continous physical
violence to create evidence.

Our definite and soul purpose of gathering outside the russian embassy
this evening is to send a signal to the russian authoroties that the
fabricated case against the ten detained should be emidiately closed,
all charges dropped, and economic compensation be given for 16 months of
illegal detention.

We state that the security services of Sweden and Russia who are most
probably closely monitoring our activities today, represent systems of
demise and obliviance against basic economical, parliamentarical and
jurudical equality for all citizens alike.

We call for you who are here in favor of the detained to be brave and
not mistrust. For remember that the louder the gathered crowds yell at
the ones to be hung at the gallows, the more it is actually a growing
frustration against the leaders in command. A frustration that will at
any given moment turn on the leaders themselves holding in the strings
to the gallows.

We urge you to spread the word to friends, comrads and family to help
gather support for our detained and tortured fellow neighbors.
Thank you for attending today and keep up the good fight!” 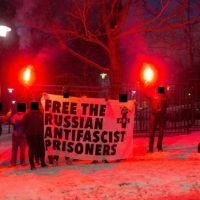 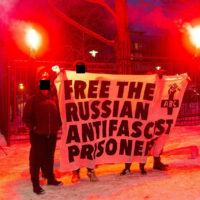 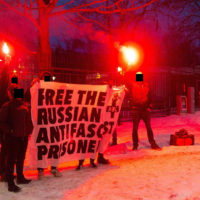 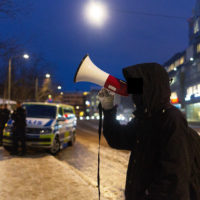 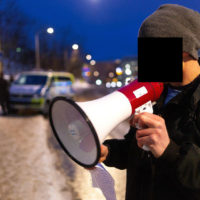 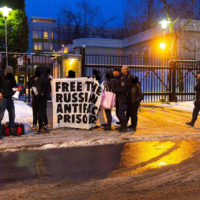 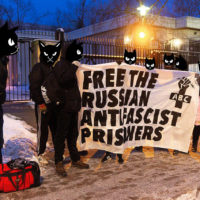